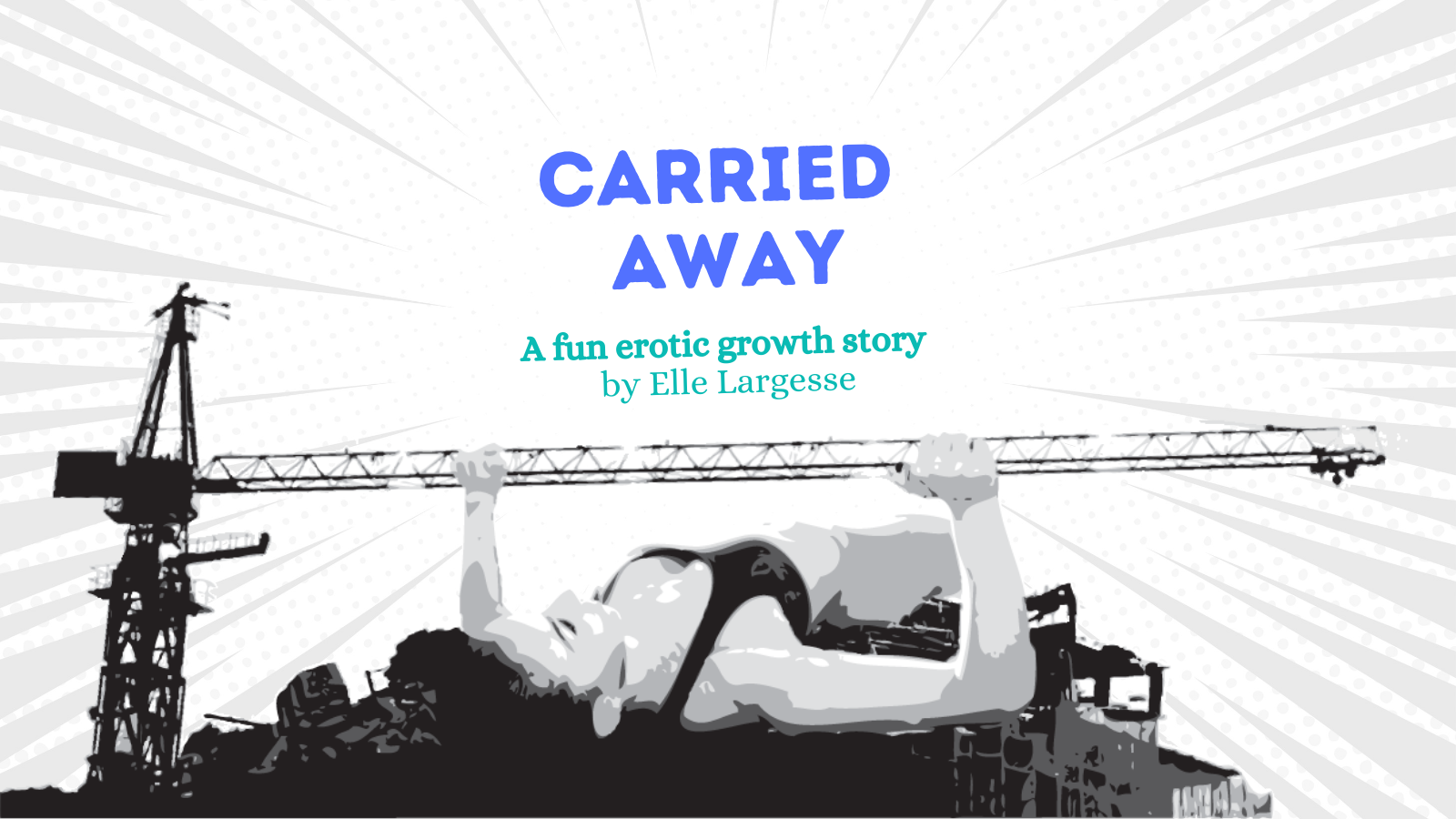 Published by mightytinygiant on October 2, 2021

(Themes include unexpected growth, building destruction, some physical danger for the Giant and the tiny, a Giant in a tight space, bruises and light injury, breast play, oral sex, vaginal insertion, some feelings, and puns.)

Sometimes you just want to write some funny sex scenes. And sometimes those sex scenes grow into stories in their own right.

I’m pleased to present Carried Away, a 5000-word F/f growth story inspired by @SunnyDLiteNSFW and this tweet:

The trope of “Oh no I’m growing out of the building! Quick! Jump inside the safety of my pussy!” is incredibly stupid……

I’m not quite sure how, but that idea grew into this:

“Right here. Right now. Focus on me and how I feel inside you.” Carrie raised her hips ever so slightly, tightening her muscles in response. They moaned together, heedless of the rubble shifting around them.

“Oh, God, Meg.” Carrie’s heartbeat was pounding. She accidentally swelled larger, her hands gripping a broken table and a metal filing cabinet so hard that one splintered and the other dented. She rocked her hips slightly, a begging motion, the universal signal for fuck me harder.

They sank into a rhythm, a dangerous, devil-may-care rhythm. She felt like a dragon twined around a castle tower, powerful and sensual. Meg was working magic inside her, like a tiny brave and bewitching sorceress. Carrie moaned into the wind and inched larger from sheer arousal. She should hold still. She knew she should.

Many thanks to @pseudo_size for beta reading and providing edits! It became a much stronger story with your suggestions.

Scroll to the read more if you want to jump right to the story.

Something occurred to me as I was writing and tinkering with point of view. It’s so rare to see a size kink insertion scene written from the perspective of the person being penetrated.

Anyone like me who’s a fan of insertion is probably familiar with the sensual tropes of a tiny’s POV as they admire, explore, and enter the body of a larger person. For me, when I’m feeling tiny, I get off the thought of being overwhelmed by the power of someone’s body. The incredible intimacy of experiencing your loving partner that way. Or the more intense fantasies that involve helplessness, humiliation, objectification, and darker themes. There’s a lot to like, no matter your interests.

The most common trope features a tiny man inserted into the vagina of a Giantess. Sometimes you’ll see a Giantess and a tiny woman. More rarely, other gender combinations.

Out of curiosity, I went to GiantessWorld.net, pulled up the insertion tag, and kept a tally of how many stories included F/f content. Full disclosure, I got bored of this after about eleven pages of scrolling. But out of roughly 220 stories, I counted about 65 that had F/f, or 29%. The GW tagging system doesn’t offer a category for the POV of the stories, but anyone who’s enjoyed this trope for long knows that most of them center the tiny’s perspective.

It would erase many genders represented in this kink community to say that centering the tiny’s perspective effectively centered the male gaze. But for many years, the people in the world most likely to create and commission kinky content were the ones with extra money and leisure time. So the artwork and erotica skewed towards the cis, straight, male gaze.

(“Male gaze” is a term coined by film critic Laura Mulvey in 1973 that describes the cinematic angle of a heterosexual man on a woman. “Essentially, the male gaze sees the female body as something for the heterosexual male (or patriarchal society as a whole) to watch, conquer, and possess and use to further their goals,” she wrote. Studies show it increases self-objectification and body shame in women. Luckily, careful and mindful application of kink is one way that a person can process feelings like that, but I digress.)

Finding the Giant/tiny size kink community on Tumblr in 2015 changed my life, because I was able to see I wasn’t an outlier as a woman in a space full of men. I was one of many women with this kink, in a space where male-centered content had reason to be vastly over-represented.

Tumblr changed all of that and empowered us to create and share the kinky fantasies that centered other perspectives.

As the article points out, Tumblr banned NSFW content in 2018 thanks to SESTA/FOSTA legislation, and many queer and kink communities scattered to the four winds. Some of us made the jump to Twitter, Discord, or created our own blogs like this one.

I remember the frantic efforts we all made to back up our blogs and writing, which weren’t very successful. It hurts to think of all the content that I technically have, with garbled code, collecting dust in my cloud storage. I can share it here, but it would take a lot of effort to excavate it, and besides, the collaborative environment where those stories came to life are gone. It’s not quite the same.

And on a wider scale, so much was lost, but especially queer femme stories and perspectives. I miss the conversations badly. If I had shared these thoughts and this story on Tumblr, people would reblog it with their own comments, ideas, essays, stories, and it would just grow like this beautiful organic thing. Like a community mural, where people would pass by it from time to time and add more of themselves and their fantasies.

You said this was gonna be a funny story. WTF?

I know this is a serious introduction for a fun post. But it was on my mind when I realized the last time I saw an insertion scene from the perspective of a Giantess was on Tumblr.

I can’t even remember who wrote it. Was it one of those slap-dash collaborative efforts, where we built on each others’ work to riff off each other, challenge each other? Was it public roleplay? Or prose? A poem? Was it a simple exploration, a few paragraphs of pleasure? I can’t even recall details enough to ask my fellow alumni from the school of Tumblr sexual expression if they remember what I’m talking about.

Themes include unexpected growth, building destruction, some physical danger for the Giant and the tiny, a Giant in a tight space, bruises and light injury, breast play, oral sex, vaginal insertion, some feelings, and puns.